Handwritten letters are a wonderful way to connect with your customers, temper sales messages with heart, and leave a positive impression.

If you want to be certain your customer, vendor, or business partner receives your message and receives it in the way you intended, there’s generally no better way than to send it in real ink, in a hand-addressed, handwritten letter.

Below are ten reasons why you should give personally-penned messages a try. It’s not nearly as difficult as you might think, and by the end of this article, you’ll see why.

Do you spend a lot on email marketing? Are you happy with the results? Email marketing campaigns manage a 22.7% average open rate. This is quite good compared to the standard competition. However, handwritten notes are never included in these comparisons, and they should be because handwritten letters enjoy a staggering 99% open rate.

Consider what you would do if you got a letter in the mail, hand-addressed in real ink. Would you immediately throw it in the garbage? Of course not!

A handwritten letter feels special. The assumption is that the sender put a lot of time into writing it. So even if the recipient isn’t sure who sent the letter to them, they will open it. 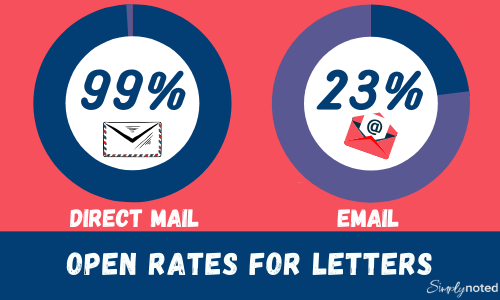 2. They Leave a Powerful, Lasting Impression

Imagine you were sending out thank you cards to your customers. What do you think would feel more heartfelt and authentic, a generic, mass-printed mailer, or a handwritten message personalized to the reader?

When was the last time you received a hand-addressed, handwritten letter that wasn’t a birthday card? If you’re like most people, the answer is, “I honestly can’t remember.”

That’s because handwritten letters are exceedingly rare in the age of email. According to the U.S. Postal Regulatory Commission, the average American received only 10 pieces of personal mail for the year in 2017. It’s simply too time-consuming to write a letter today when you can send a text or an email.

But this rarity is why handwritten letters feel so valuable.

4. Handwritten Letters Separate You from the Competition

Email is extremely economical and simple to generate. Mass-printed direct mail pieces need only be designed once and then they can be printed by the thousands. These are the methods your competition is using to reach its customers. What are you doing to stand out?

For your critical communications, nothing boosts you above the din better than a handwritten mailer. It will take your customers by surprise, and if they don’t open it immediately, it will go on the top of the stack for later. The generic mailer your competitor sent will likely be in the garbage.

Sending a handwritten letter is like sending a piece of yourself. It takes quite a bit of intentional effort to craft one, and that emotional energy is sent along with the letter.

This is why they’re so special. Your recipient can see you in the curve of your letters, the heavy application of ink when the news is good, and the subtle little touches that differentiate your handwriting from every other person in the world.

People keep handwritten letters because they’re not just a letter. They’re a gift.

Imagine a friend was in the hospital out of state, removing the possibility of a visit. What would be the next best way to convey your deep desire for their speedy recovery — an email, a text message, or a handwritten card?

Nothing can replace the personal touch you send when you apply pen to paper, lick and close an envelope, and pay to place it in the mail. It shows that you cared enough to take the time.

As you’ll soon learn, handwritten letters don’t need to take hours to create. They can be generated quickly and affordably, and the powerful connection they build can cement new relationships, both personal and professional.

Emails are impersonal. Texts have about as much value as the time it takes to generate them. Handwritten letters, on the other hand, show you care, as we’ve noted. So if you’re trying to build a positive relationship, there’s no substitute for the power of the pen.

People love to get handwritten letters for all the reasons we’ve included so far. They’re rare and exciting. They demonstrate just how important the recipient is to the sender. They’re a personal artifact that can become a cherished memory.

People understand what goes into handwriting a letter, particularly when sending an email is so much easier, so a handwritten letter is always appreciated.

9. Handwriting Letters Is Good for You

We already know that handwriting is good for memory, focus, and creativity. It turns out that writing letters also makes you happier! Numerous studies have shown that the sort of expressive writing which goes into handwriting letters — writing that expresses your inner thoughts and feelings — has a measurable positive effect on your perceived mental well being.

The act of putting pen to paper and participating actively in this exercise compounds the benefits for the same reason letters are so special to their recipients. There’s a visceral sense of reaching out and making contact with your loved one in a way that isn’t accessible via digital mediums.

This is likely the most surprising heading in this article because it seems to fly in the face of everything else you’ve read. How can it be when, by definition, a handwritten letter requires painstaking effort to create?

The answer is automation. Simply Noted has perfected a method for mass-producing letters and cards, written in real ink by real ballpoint pens, using an authentic reproduction of your handwriting.

We use a fleet of handwriting robots that allow us to pen, in real-time, hundreds or thousands of handwritten messages that are virtually indistinguishable from the real thing. We can substitute in your customer’s names and other personal details and even add your signature.

When you round out your mailing with an automated, hand-addressed envelope, you can get all the benefits of handwritten communications paired with the speed and convenience of standard printing.

There’s simply no better way to reach your customers!