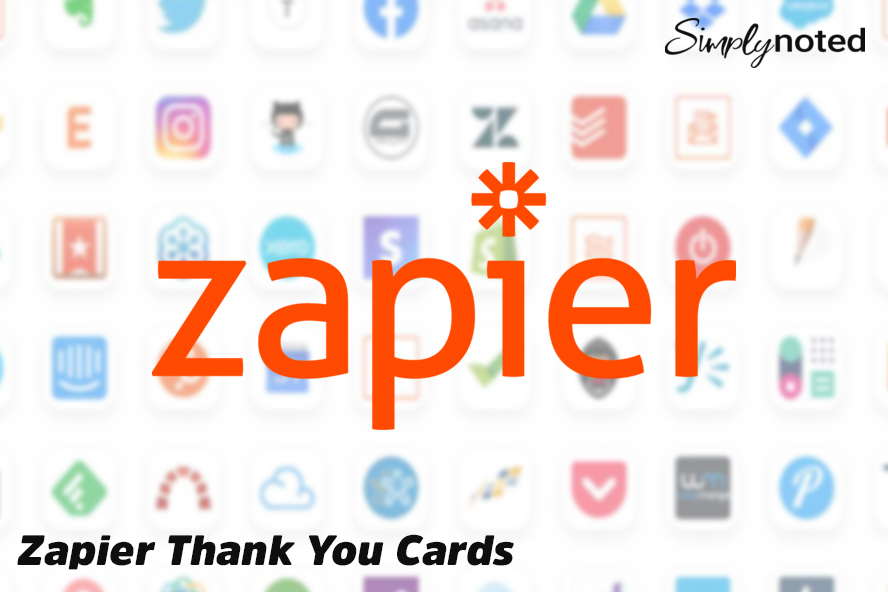 Zapier is an automation tool that allows users to link different software packages together to create interesting and useful interactions. Sly entrepreneurs might use the package to send their customer support team a Slack update every time a new customer signs up, or link Gmail and Trello to create a “zap” that automatically adds new emails to an existing Trello board.

If you’ve never had the pleasure of using Zapier, you’re likely unfamiliar with just how powerful this unassuming tool can be. If you’re a regular user you might think you know what it can do, but Simply Noted is teaching it some new tricks. With our integrations, you can use Zapier to trigger the creation and mailing of authentic, pen-written thank you, birthday, and holiday cards in response to any of the thousands of triggers possible in Zapier through any of the software packages it supports.

SEE ALSO:  The Value of Automated Thank You Cards in Business

Handwritten notes are a powerful way to grow your business and create meaningful relationships with your customers. But no one has time to write hundreds or thousands of cards themselves. That’s where Simply Noted comes in. We’ve built a fleet of handwriting robots that use real ballpoint pens and advanced font technology to create automated, handwritten cards that are indistinguishable from the real thing. Pairing Simply Noted with Zapier allows you to trigger handwritten notes in the real world using digital triggers in almost any application you use.

That’s a lot to take in, we know. A few examples should help clear up what we mean. But first a quick primer on how Zapier does what it does.

Every application you use takes inputs and creates outputs. You, the user, takes an action that triggers the program to do something, spitting out a result at the other end. The problem is that these applications are siloed. Actions you take in one program can’t be seen by other programs. You couldn’t have an action in Twitter cause something to happen in Slack because neither application knows the other exists.

Zapier bridges this gap. It offers integrations with over 3,000 different software and web application packages. It can monitor what they’re doing and trigger actions in one based on actions in another, using rules you set up.

SEE ALSO:  What to Say in a Business Thank You Card

Zapier accomplishes its magic using “zaps”, their term for discrete automations you build between packages. Zaps have two components — triggers and actions.

Triggers are events that begin a workflow within Zapier. Examples of triggers include receiving a message in Gmail, posting an update to Facebook, receiving an order in Shopify, and getting a response to a SurveyMonkey survey. Each of these events could be used to trigger actions in other applications using Zapier.

Actions are the events you want to happen in response to a given trigger. Triggers and actions together create a zap. Let’s you want to add all of your new social media posts into a dedicated Slack channel for review by your staff. You would create a zap like this one:

That’s a pretty simple zap, but they can be as complicated as you like. You could have a single trigger begin a workflow with multiple actions. Something like:

Zapier automates repetitive tasks like these so that you and your staff can focus on more important things.

SEE ALSO:  How To Write Thank You Letters to Your Customers

SENDING HANDWRITTEN THANK YOU CARDS WITH ZAPIER AND SIMPLY NOTED

Now that we understand what Zapier does, let’s look at a few concrete examples of how you can use Zapier to capture the power of handwritten notes in your regular marketing automation and beyond.

If you run a Shopify store, you likely already send thank you emails to customers when they place a new order. It’s just good business to thank your customers. But imagine how much more impressed they’d be if they found a handwritten thank you note in their mailbox a few days later. It would demonstrate that your company takes customer service seriously, setting you apart from every other online retailer. Here’s the zap you’d create:

With no extra effort on your part, your customer will receive a personalized, handwritten thank you card automatically.

The fact is that emails are forgettable. When you send a thank you email, there’s a very good chance your recipient will never read it. What good is a thank you that’s never seen? Handwritten thank you cards, on the other hand, make a lasting impression.

SEE ALSO:  5 Examples of When to Send Thank You Cards

Thank you notes aren’t just for customers. They can build goodwill with your employees as well. With Simply Noted and Zapier, handwritten notes become an automated morale-building tool. Imagine designing a zap like this one:

We’ll automatically create a handwritten thank you note and make sure it arrives on or before the employee’s special day. With this zap, your staff will get the recognition they deserve without any extra mental overhead on your part. With Simply Noted and Zapier, you get set-it-and-forget-it thank you notes, birthday cards, holiday messages, and more for a very affordable price.

These are just two examples, but the possibilities are endless. Remember, Zapier interfaces with other 3,000 packages, and you can use any of them to trigger automated, handwritten notes. You can create automated workflows that elevate your communications above emails and text messages. The warmth and personal connection that are only found in handwritten notes are now accessible from anywhere.