How to Convert Text to Handwriting Online 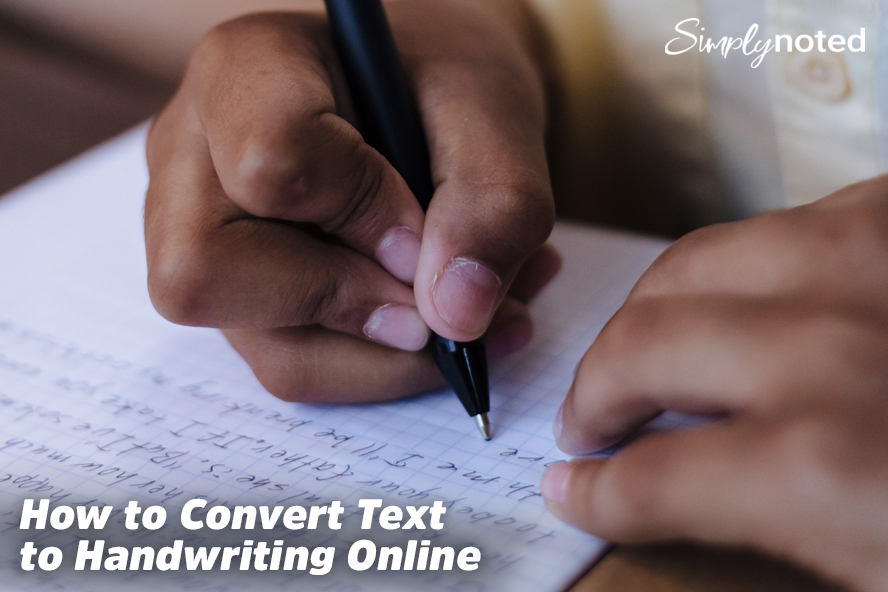 In the perfect future we’re living towards, thoughts will transfer to text instantly. Whether digital or handwritten, the link between mind and communication will be instant.

Until then, we can still make our handwritten communications easier. We may not be able to handwrite a letter with a thought, but we can do it with a computer. Today, several technologies exist to help us convert text to handwriting online.

The applications are myriad. Imagine typing a letter and getting a perfect, handwritten card out the other end. The most advanced handwriting converters are capable of this and more. The lesser competitors are also capable of a few tricks. Depending on your needs, there may be one or many ways to convert text to handwriting online in a way that helps you.

WHY WOULD YOU CONVERT TEXT TO HANDWRITING?

There are endless reasons why one might need a handwriting tool to convert text to handwriting online, but a few stand out.

This is far and away the most popular reason to swap digital text to handwriting. Handwritten cards are the best way to connect with other people. They’re personal in a way that no other text-based communication method can match. But they’re labor-intensive (which is part of the appeal) and challenging to create in bulk. This limits their usefulness in business.

Simply Noted frees the handwritten note from your hands! You can send us your addresses and messages, and we’ll create authentic handwritten cards using our fleet of handwriting robots. Our servers convert your digital message into an intricate dance of pen on paper, guided by artificial intelligence, leaving a handwritten trail of ink that’s indistinguishable from the real thing.

SEE ALSO:  Why Robots Are the Better Choice for Handwritten Notes 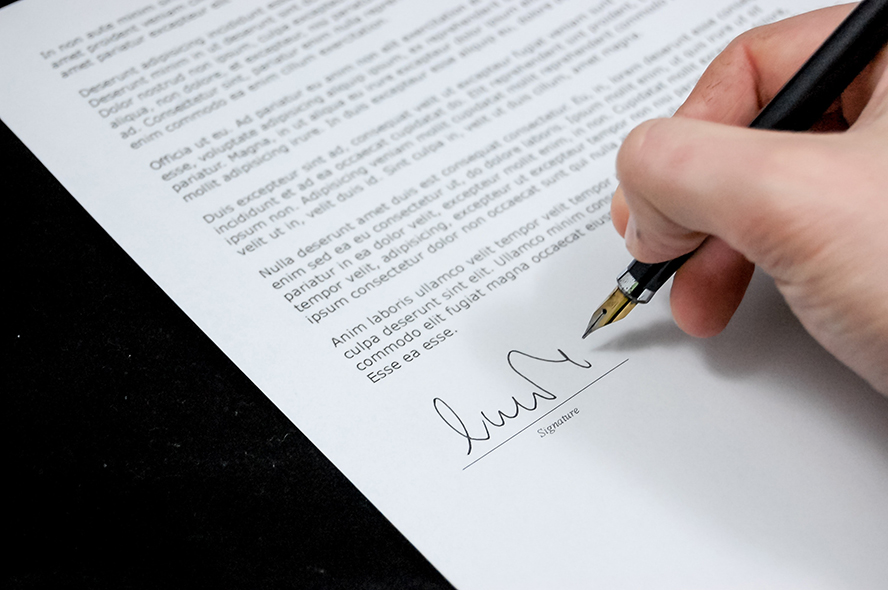 To Create a Digital Signature

Digital signatures are gaining acceptance rapidly. In a few years, handwritten signatures will likely fade away. People sometimes use an online text-to-handwriting converter to create a digital signature they can use when signing digital documents. There are several sites online that can walk you through the process of creating a digital signature.

If you’re designing a flyer, sign, or other printed communication, you may find occasion for elegant, handwritten text for decorative purposes. Quite a few online services let you type something, select a handwriting font, and spit out styled text on the other end. They’re often attached to full online design tools. Select one that squares with your skill level. After, you'll download handwritten text from your free online tool. It will generate image output that reflects a handwritten version of your text. This generated image can be placed into any document or other project or saved to a PDF format or JPEG image.

Do it For Fun!

There’s a world of handwriting fonts out there. Sometimes it’s interesting to explore! Type something into one of the myriad online converters and flip through your options. You’ll be amazed at all the different ways people shape human languages with their hands.

There are many reasons to convert text to handwriting online and as many options. 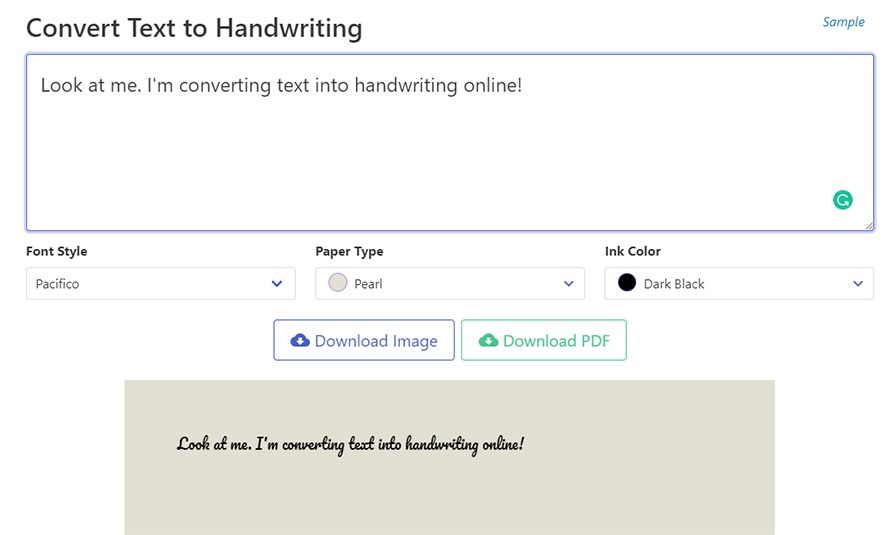 HOW TO CONVERT TEXT TO HANDWRITING ONLINE

Standalone text-to-handwriting converters don’t add extra bells and whistles. They do one thing and one thing only. They convert digital text to handwritten text. A free notes maker app online might be a good example.

Don’t expect the results to win any awards. Most of these websites use simple handwriting fonts, using existing digital technology to create something resembling handwriting. The resulting “handwritten” text can be downloaded and printed or sometimes sent for printing with a third party.

These standalone converters are good for creating clip art text or generating a digital signature design. You wouldn’t want to “handwrite” cards with these sites, however, or use them for any application where the quality of the handwriting matters. These sites are mostly a novelty, like an online birthday letter generator or Christmas letter generator. If you need to change text to handwriting so that the results look genuine, you’ll need the second type of converter. If you use standalone converters for professional purposes, you'll almost certainly delete files because the quality just won't be there.

SEE ALSO:  How to Outsource Your Handwritten Letters

Application-native converters are built as a component in a larger system, usually an application that uses handwriting conversion to solve a real-world problem. These converters generate much higher-resolution handwriting. Their output can sometimes fool the viewer into thinking their seeing real handwritten text.

Simply Noted is an example of an application-native converter. Our handwriting machines take your digital text and write it down on paper using real ballpoint pens and pen ink colors in the same way you would write the message yourself.

The handwritten output is superb. Our AI-powered smart fonts have learned the subtleties of human handwriting and can vary letter shapes, sizes, placements, spacing, and more to make the difference between human and machine-written text invisible. We can even create a custom font to make the final result look like your own handwriting. Our cards closely replicate the look ofa real handwritten page because, in a sense, it is a real handwritten page. 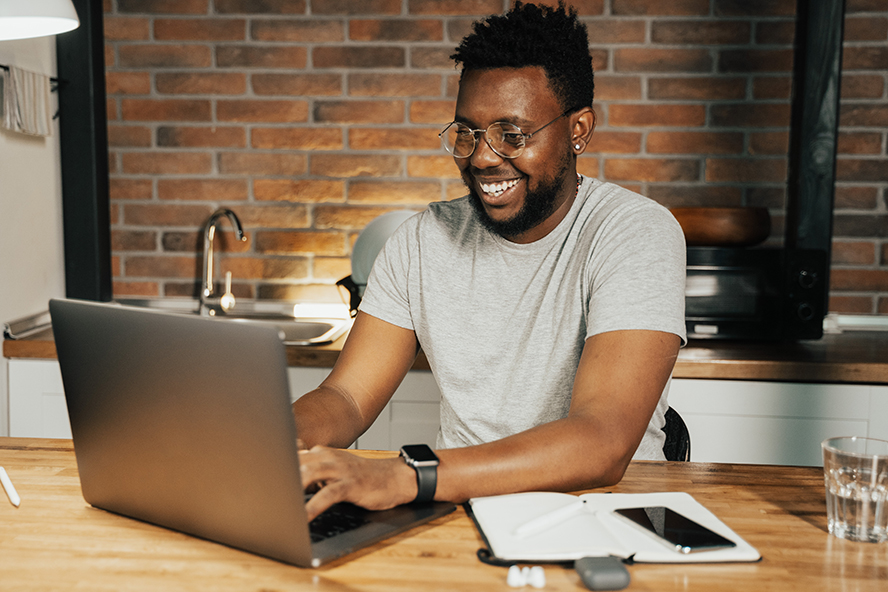 Most online handwriting text converters are for novelty use. Simply Noted is a notable exception. Compared to standalone converters, Simply Noted’s handwritten text is in a class by itself; they've developed the most realistic handwritten fonts available.

This isn't to say other online text-to-handwriting converters aren't useful. You simply need to understand their limitations. You’re not going to get convincing handwritten text from most standalone converters, but you don’t always need the illusion to be complete. Sometimes good enough is good enough.

On the other end of the spectrum, automated handwritten cards require handwriting excellence. If you received what you thought was a handwritten card and noticed that every lowercase “a” looked the same and every other letter matched itself perfectly every time, the illusion would be spoiled.

Similarly, if you touched the page and didn't notice an indentation left by the pen, you'd know the “handwritten” text was printed on the page by an inkjet or laser printer. Even with both light and dark versions, you can tell.

That's why Simply Noted has put so much time and effort into creating an online handwritten solution that recreates all the subtleties of human handwriting. Because the power of the handwritten word is the fact that it was written by hand. You can't take advantage of the cache this provides if your reader doesn't believe a person wrote the message. Like a drawing on square-lined papers, the illusions is only as good as the artist.

Here’s the moral of the story. Simply Noted has perfected a method to convert text to handwriting online that can send the handwritten word anywhere in the world, at the push of a button. One, ten, a hundred, or thousands of cards — no matter the volume we can take your text and convert it into the loveliest, most convincing handwritten cards you’ve ever seen.